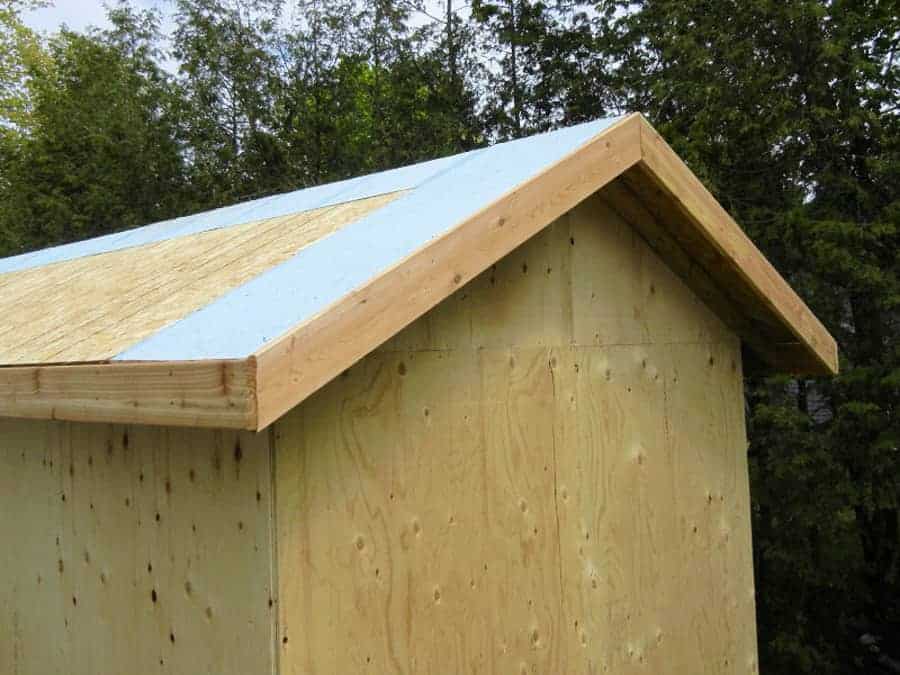 Roof sheathing is something that is not seen once the shed has been finished, but it’s very important, nonetheless. If you’ve ever seen a home or building that has faint outlines of the rafter placement because the roof sheathing between the rafters is sagging or bowing, you know you don’t want that to ever happen to your shed.

This is also part of the shed that will take a lot of work and materials if you have to replace it for some reason. You can’t replace the sheathing without replacing the shingles or other roofing.

The most common roof sheathing thickness is 7/16-inch, some use 5/8-inch T/G for areas with heavier snow loads which provide extra strength and prevents sagging between the roof rafters.

The two most common materials for roof sheathing are plywood and OSB, or Oriented Strand Board. One thing that will help is that most roof sheathing materials come with a stamp that says APA on it. Underneath these letters should be a couple of numbers divided by a slash mark.

The first number tells you the maximum distance that the panels should be able to bridge between supports with no problems. For instance, if you see panels that are stamped with 24/0, that means that the panels are rated to be able to span up to a 24″ rafter distance.

Some of this is due to how the plywood is made. If in doubt, it’s always good to choose a product that may be a bit stronger than you think you may need rather than trying to save money by getting something that will hopefully just squeak by. Like your shed’s foundation, choosing your roof sheathing thickness is not the place to cut corners.

Plywood is made from thin wood veneers shaved from a spinning log. They are laminated together in layers, with each layer with the grain facing at a 90-degree angle from the layer beneath it. Most plywood is five to seven layers thick. The lamination is carried out under a certain amount of pressure. While plywood can expand when it gets wet, it expands evenly across the panel and dries fairly quickly.

Plywood comes in grades from A to D. These grades refer to the quality of the surface veneer of each side. A-grade plywood is the best, featuring a smooth surface with no knots, but it may have small, filled-in defects. This is the type most used for cabinets or furniture and takes paint well.

B-grade plywood also has a smooth surface, but the repaired defects may be larger, up to one inch long, and there may be more of them. C-grade plywood is not sanded to smoothness and may have both knots and some small defects that you may have to fill. D-grade is the lowest quality and can have knot holes as large as 2-1/2 inches across as well as unrepaired defects.

The lower grades are fine for roof sheathing, as neither side will be seen. You can save money by purchasing plywood graded as CD, with one side rated as C and the other as D. You’ll want the C-graded side to face your roofing.

You’ll soon find that some plywood has two letters on it. Typically, the side with the highest grade is used on the side of the plywood that may be seen, while the lesser side is hidden. Unless you are using plywood for something that will show both sides of the panel, such as cabinet doors, there’s no need to purchase panels that are A-grade on both sides.

There are also ratings for plywood: Exterior, Exposure 1, Exposure 2, Interior, and Structural.

The Interior rating is self-explanatory. A rating of Structural 1 is made to be earthquake resistant. It’s used in seismic retrofitting.

CDX plywood is popular to use for roof sheathing. CDX refers to the type of glue used to bond the layers together. This type of plywood can stand up to temporary exposure to moisture or rain. This is especially important if you end up with damage to shingles from hail or tree debris after a storm. You won’t have to worry so much about the plywood being damaged from rain leaking through onto it.

Another thing to consider that will impact your choice of roof sheathing is the material you plan to use for your roofing. If you plan to use something heavy such as metal roofing, you will certainly want to use a thicker material for sheathing to be able to bear the load of the roofing itself without problems. Check out my article How to Choose the Best Roofing Material for a Shed for more options on shed roofing material.

Oriented Strand Board or OSB is the other popular choice for roof sheathing. It’s made from strands of wood stripped off logs. It’s glued together in layers alternating in direction with a strong glue under high pressure.

It usually costs less than plywood, but some authorities don’t recommend it for roof sheathing. OSB is more susceptible to swelling when it encounters moisture, especially on the edges. While it takes longer to absorb moisture than does plywood, it also takes longer to dry out afterward. 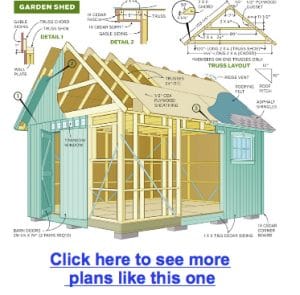 If you use OSB, you’ll need to be vigilant in inspecting your roof periodically and promptly replacing damaged shingles or other roofing materials to prevent moisture from reaching the sheathing. OSB also is not as good at holding nails as plywood.

OSB/3 and OSB/4 are both rated for load bearing and are used in humid conditions. Both can be used for your roof sheathing. The main difference is that OSB/4 is rated for structural components and has a heavier load-bearing capacity. It would be a good idea to ask your supplier what grade of OSB he recommends for your local weather conditions.

What is the Best Thickness for Roof Sheathing?

There are various opinions on this matter, but the most commonly touted thickness for roof sheathing on a shed is 5/8-inch thick. Anything less may result in eventual bowing or sagging between the rafters or trusses, especially if you are using OSB. Some people trust 1/2-inch of thickness for plywood, which is a little stronger than OSB.

The absolute minimum you can consider is a 3/8-inch thickness, but it’s certainly not recommended. In fact, this thickness will not satisfy building code requirements in most places.

If you live in an area prone to heavy snow, you may even want to use something thicker. Roof sheathing is not a place where you can afford to skimp. It will also allow you to replace broken or cracked shingles without worrying about having to replace part of the sheathing. You’ll still have a solid place to attach the new shingles. You surely don’t want to have to worry about your shed every time the weather forecast includes several inches of snow.

Using 7/16-inch is even a little better than 5/8-inch and is commonly used for places that get heavy snow. It can carry up to 30 pounds of load per square foot. This thickness is actually the thickness most commonly used for OSB roof sheathing. Still, be sure to pay attention to that APA rating so you can be sure to get just what you need. Much like plywood, not all OSB is created the same.

Should You Use Tongue and Groove OSB for Roof Sheathing?

Tongue and groove sheathing is used mostly when the sheathing will be visible from inside the building. It makes for a more attractive ceiling. While the tongue and groove construction does offer a bit more strength, it can be tough to install. The joints don’t always connect very easily.

OSB especially has a tendency to expand or swell at the edges if it gets subjected to moisture, which would really make it hard to get the panels to fit together. It’s really a matter of taste, but most people building a shed aren’t very concerned about what their roof sheathing will look like from the inside.

What Type of Plywood is Used for Roof Sheathing?

CDX is the most commonly used type of plywood for sheathing and is considered to be construction grade. The X indicates the type of glue used in the formation of the plywood. It makes the plywood resistant to water. This makes it far less likely to be damaged by water leaking underneath broken or cracked shingles. The C and D mean that one side of the panel is graded C, while the other side is graded as D.

One other type used is FRT, which stands for fire-retardant plywood. It’s sometimes required on buildings in certain areas, such as those prone to wildfires. If your local building codes require this, it will be included on the list of regulations you can get when looking into getting a building permit. If you want to waterproof your plywood yourself get more information in my article What’s the Best Way to Waterproof Plywood?

What Joist Spacing Should I Use for Roof Sheathing?

How Do You Install Sheathing on a Roof?

You’ll need a tape measure and chalk line, a circular saw, sufficient nails, and your chosen roof sheathing material. It would be great if you can use a framing nailer, but a good old hammer will work just as well, even if it takes a little longer.

Here’s a video that will help you install your roof sheathing.

It would be best if you can choose a day when the weather will cooperate. If you can’t install both the sheathing and roofing in one day, plan to have something such as waterproof tarps to protect the sheathing until you can install the roofing.

What Are the Best Fasteners to Use for Roof Sheathing?

The most commonly recommended fasteners are 8D nails. 6D nails used to be the common choice, but 8D nails are much better at withstanding heavy winds. These nails are around 2-1/2 inches long. They should be placed at a maximum of six inches apart at a 3/8-inch distance from the panel edges.

Once you get all the roof sheathing and roofing installed, you’ll be finished or nearly so with your shed project. Now you can stand back and admire your work, even if you still have some painting or other task to do. It’s time to break out a beverage and pat yourself on the back.

link to 5 Tips for Framing a Door Rough Opening

If you're a dedicated build-it-yourself type of person, then framing a door rough opening may be easy for you. For others you probably have plans to build that yard shed or outbuilding yourself...