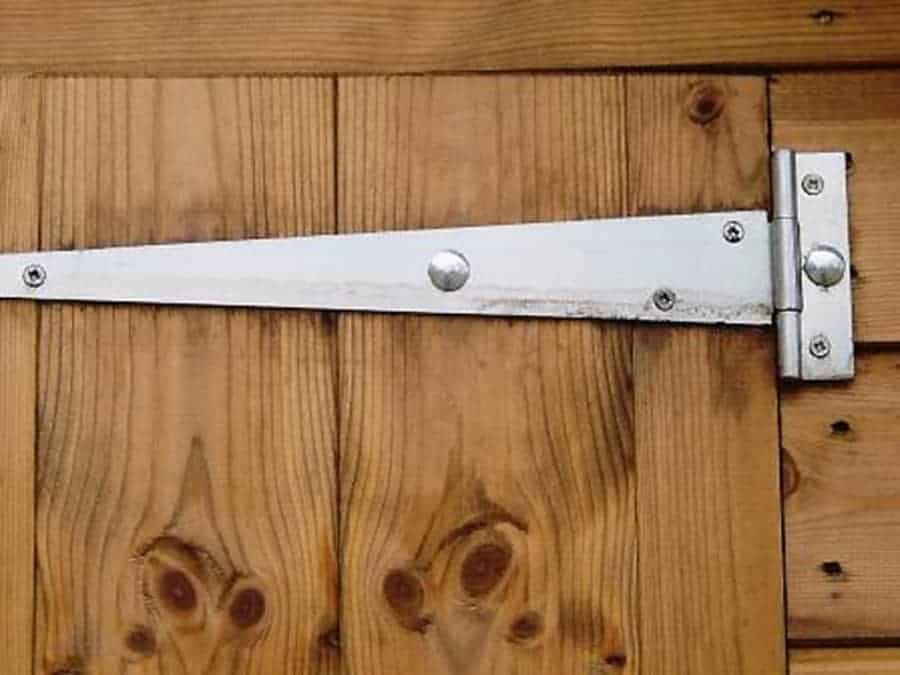 You may hear reports of burglaries in your area from time to time. You may even know somebody who has been victimized by a burglar. While many people buy all sorts of cameras and alarms to secure their homes, some don’t give their sheds a thought.

You may think you don’t have much of value in your shed if you store nothing large like an ATV, but a burglar won’t know that until he breaks in and sees what’s there. Drug users get much of their money from theft, and often aren’t in their right minds anyway when they hit a place, so there’s no telling what they might take.

Anything somebody thinks he might pawn or sell for a couple of bucks is fair game. Also, a shed easy to invade may make the house itself seem more like easy prey, and thieves might try your house next time. Whether you have expensive tools in your shed or not, it’s a good idea to discourage burglars from even thinking about your property. This means making your shed more secure.

Using security hinges can make burglars rethink their plan, there are several types you can install on the door hinges, to make breaking in a lot harder.

One good way to do this that you may not be aware of is to use security hinges on your shed door or doors. While there are many types of security features available for the doors on your home, sheds present a particular problem.

This is because house door security features don’t translate to a shed door. Sheds may not have a door frame all around, they are usually wider and heavier than house doors, and they open outward.

Your door hinges may well provide an entry point for a burglar. The thief can bypass whatever lock you have, just unscrew the hinges and open the door. Since most hinge screws are on the outside, a battery-powered handheld screwdriver is all a burglar needs to gain entry.

How Do Security Door Hinges Work?

These work by replacing a screw on one side with a pin and removing the screw on the other part directly opposite. You then enlarge that screw hole enough to accommodate the pin on the other half. When the door is closed, the pin secures both sides of the hinge together.

Hinge pins work best for doors that open outward and only have the hinge barrel containing the pin on the outside of the door. On these doors, the hinge’s screws are not visible on the outside. Most sheds, however, have hinges that are completely on the outside of the shed, such as T-strap or barn hinges. Then you have the problem of someone just removing the screws, so other measures must be taken to protect these.

How to Reinforce Door Frame Around Hinges

You can reinforce and secure your hinges all you want, but if the wood holding the hinges isn’t up to par, your door can still be kicked in, splintering the frame. The frame wood holding the hinge may only be an inch thick. The best way to reinforce your existing door frame is to add a layer of steel to make the frame kick-proof. Place high gauge steel over the door jamb all the way around. Use screws that are long enough to reach into the wall studs.

Do All Door Hinges Have Removable Pins?

Hinges used in the home, even for outer doors, usually do have removable pins. These allow for easy removal of a door in cases where wide objects such as furniture need to be moved through. Since house doors open inward, the pin and screws are all on the inside, so removable pins aren’t a problem.

Since sheds usually have doors that swing outward, the hinge pins and hinge screws are on the outside, presenting a method of getting in the door without even bothering the lock. This is why security screws and pins are a must on shed doors.

How Secure Are Door Hinges That Are Mounted on the Outside of Door?

Most hinges, especially in homes, swing inward. This means that the hinge hardware and pin are located on the inside of the building. Most shed doors swing outward so they can open fully and not be in the way when moving something large, such as backing your riding mower out of the shed. This presents a problem. Using heavy gauge hinges will help with this.

The screws on the hinges can be removed with a simple screwdriver, allowing a thief to bypass the lock entirely and open the door from the other end. In addition, somebody can tap the pin out of the hinge with a simple Phillips screwdriver and something to hit it with, including a nearby rock. There goes the hinge, and the door is open.

One good way to foil the first choice is to install screws that are hard for the thief to unscrew. Using assorted types of screws, such as mixing Phillips, slot and Torx screws on the same hinge will require various tools. The best choice, however, is to use screws that can’t be removed once installed without a specific tool or those that need a specific type of tool to remove.

Torx screws, especially those that come with a center pin are great. Torx screws require a special bit to remove; those with the pin require an even more specialized tool. Clutch head screws are even better. They can be installed using either a standard Phillips or flat-bladed screwdriver but can only be turned in one direction – tighter. Removal takes a very specific tool. Unless your burglar comes with every tool he might ever need, he’ll have to give up on removing the hinges.

Another way is to install carriage or coach bolts on the hinges. If you have narrow T-strap hinges, you may not have room to replace all the screws with these bolts, but one bolt on either part of the hinge will keep thieves from removing the hinges. Remove one screw from the center of both the long part and the square part of the hinge. You’ll need a metal bit to enlarge these holes to accept the bolts.

Hammer the bolt through with the rounded side toward you, then screw on the washer and nut on the inside. The round head is impossible to turn with a screwdriver or wrench, so he even if a thief gets your screws out of the hinge, he won’t be able to get past these bolts. Read my article How To Increase Shed Security and Prevent Break-ins for more ways to secure your shed.

Continuances Hinges – These are also called Piano Hinges. These are long hinges that go the whole height of the door. If somebody tried to remove one, he would have to cut the entire length of the door. This hinge also covers the whole gap between the door and the frame, so there is no room for a crowbar to use to pry the door off the hinge. Any burglar confronted with one of these isn’t even going to try.

Security Studs – Since your shed door opens outward, the hinge pins will also be outside, allowing somebody to dismantle the hinges by sliding out the pins. Security studs prevent this by locking the leaves of the hinges together when somebody removes the pin. Installing security studs on your existing hinges is easy.

Remove a screw from both parts of the hinge that will meet when the hinge leaves are together. Replace one screw with the security stud and drill a receiver hole in the other screw hole. The stud will slide into the hole, locking the two hinge leaves.

Non-removable Pins – People who have the bright idea that they can just tap the pin out of the hinge and dismantle the hinge that way can be stopped with these hinge pins. They cannot be removed or popped out. To remove it, the barrel of the hinge would have to be cut.

Flush-mounted door hinges are most often used on indoor cabinets or house doors. However, if your shed door is a standard framed door, you can use butt hinges and mount them flush. This entails cutting a mortise into both the door and the frame so that both sides of the hinge lie flush with the door and frame wood. Need help choosing hinges? check out my article How to Choose the Best Shed Door Hinges.

That means that the hinge does not stick up above the wood surface. The mortise shape is usually traced around the hinge leaves, then a knife is used to cut around the shape. The rest of the shape is made with a chisel to the depth of the hinge plate’s thickness.

For a shed, choose a hinge designed for outdoor use. A stainless-steel ball-bearing butt hinge will work well and be secure without additional effort. They are made to last a long time and to tolerate exposure to the elements. They also survive heavy use.

Ball-bearing hinges have sealed pins that cannot be removed. Since butt hinges for doors that swing outward are usually mounted so that only the hinge barrel is exposed to the outside, the only risk is somebody removing the hinge pins. Using ball-bearing hinges automatically eliminates this problem. The screws are located between the door and frame when the door is closed, so no removal of screws is possible.

Securing your shed from break-ins isn’t that difficult and by using good locks and security hinges where needed you can prevent a break-in and the headaches that follow.