If you’re building your own shed, the hardware on the door or doors will be something you need to choose. Even if you’ve bought a pre-built shed, you may look at your shed latch and wonder just how well it will deter a potential thief. Either way, you want to have your shed as secure as you can get it.

The longer it takes a thief to get in, the more likely he’ll be to be seen and reported. If it looks as though he’ll need a tool or tools, he doesn’t have on him, he’ll go elsewhere. The goal is to make it look as though it will be too involved a job to bother with. Thieves like easy break-ins that won’t take long so he can get in, snatch, and go.

If you live in an area that is not prone to break-ins and you don’t have to worry so much about security, then ease of use is probably what you’re interested in. The following latch types are some of the more commonly used, and all will go well with a rustic look, especially if you’re just replacing a latch on a weathered outbuilding.

Turn Button Latch – This is a simple latch that is turned over the door and frame to hold the door or doors shut, then turned along the frame to open the door. They are usually made of metal with a screw in the middle to attach them to the frame above the door.

They have a raised middle to give you a grip. Part of the latch extends over the door when it’s turned vertically to hold the door. Some are attached to the side of the door frame instead of the top. These are very easy to install and only cost about $6 to $8.

It’s easy to make your own out of wood if you choose, but if you do, be sure to use hardwood such as oak instead of softer wood, as the latch will see a lot of action. Using a softer wood may see the latch wear out after a time. Using metal latches will provide a sturdier, longer-lasting latch. Be sure not to screw it too tightly to your frame so that you’re able to turn it when needed.

Sliding Latch – This is one of the most common shed latches. They are also known as barrel bolts. There are two parts to this type of latch. The main part is attached to the door. A bolt slides from this part into a corresponding piece attached to the frame. Try getting one with a galvanized finish.

This type will last much longer than one that comes painted, as these are often made with a cheaper metal, and the paint is the only thing protecting the metal from rust. You can also get one that accommodates a lock. There are also some made from wood to carry over the rustic look.

These cost from $6 to almost $20, depending on size and material. The only hard part of the installation is lining up both parts. Other than that, you’ve only got a few screws.

Sometimes a wedge is used to keep the latch from being raised by accident. Often this wedge is loose and is secured to the door with a string or cord to keep it in easy reach. This type of latch comes in both metal and wooden types. The metal ones, in particular, can be found with some decorative hardware and handles, so see what fits your taste.

Like the sliding latch, these only require lining up both parts and a few screws for installation. They are usually available at farm supply stores if you can’t find them in your local home improvement store. Depending on size, they can range from $15 to $30.

Suffolk Latch – This latch was named for England’s Suffolk County, where it originated way back in the 16th century. There is a thumb lever on the outside of the door. Pressing this operates a bar latch on the inside of the door. It can easily be opened from either side.

There are many decorative styles for this latch in various metal finishes. However, there are some more primitive types made from wood if that’s what you prefer.

These may be a little more involved in the installation, but that depends on how they are constructed. They range from around $20 on up, depending on material and how decorative they are. Most used for exterior doors come with a built-in lock.

Also you may want to beef up your hinges, check out my article How to Choose the Best Shed Door Hinges for help with that.

How Do I Keep My Shed Door Closed?

You may have noticed that despite your shed being closed and locked, your door may try to open and push against your door lock on windy or stormy days. This puts a strain on the screws holding the hardware. A turn button latch on top of the door can hold it firmly closed and prevent it from being moved by the wind. 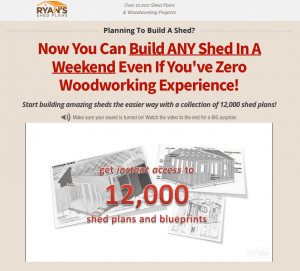 This type of latch is especially handy for those with double doors on their sheds. The latch is used on top of the second door on the inside to hold it shut whenever both doors don’t need to be opened.

We’ve all been there. We open the shed door, then go back to either push in a heavy lawn machine or go inside and try to come out with a real armload of things, only to have the door shut right in our faces before we get there. How do you keep that door open when you need to?

One of the best, and simplest, ways is called the cabin hook. The main part with the hook is attached to the shed wall with the other part attached to the door. When the door is open, the two parts are attached, holding the door open. You can easily use a sturdy hook and eye combination for this.

Another type is the kind that is attached to the bottom of the door. Once you open the door, you kick down the door stop. It digs into the ground to keep the door from moving.

What Is the Most Secure Shed Door Latch?

Probably the best kind of door latch for security without spending a lot of money is the type featuring a hinged hasp that doubles back on itself when closed to hide the screws that attach it. It also features a place for a lock, of course. This way a thief can’t just bypass the lock by unscrewing the latch. The most secure of this type is made of hardened steel, making it very tough to try to use a hacksaw to get through it.

For those with a larger budget, you might look into a full-door bar. The hardware should be affixed to the door frame rather than any wooden cladding to make it more secure. These types are more costly, but just the sight of them tells a would-be thief that you’re serious about security and that he’ll have a harder time getting in. Check out my article How Secure Does a Shed Door Lock Need to Be? for more information and tips.

What Type of Shed Door Latch is Best for Double Shed Doors?

Many of these feature either a built-in lock or a loop to accommodate your own lock. The type with a sliding bolt is sturdier than the other type and will also keep your double doors closed more firmly.

Since there will be a bit of play between the doors, even when they are locked, a little extra care will help this. A turn button latch on top of each door near the opening will keep the doors from opening a bit in wind. For extra security, a latch with a longer reach will also help keep the doors more firmly together, preventing a burglar from getting enough space between the doors to slip in a hacksaw to try to saw your latch hardware apart.

Do I Need Shed Door Latches on Top and Bottom of the Door?

To firmly keep your door shut, you might want a door latch on the side where a normal door handle would be and a latch on top of the door near the edge. This will keep it from wobbling and straining with a gusty wind. Latches on the bottom of the door aren’t really necessary. Once you have the long side and the top secured, that door won’t move unless the door is pretty flimsy to begin with.

Deciding on your type of door latch will often depend on your security needs and your own tastes. In addition to your door latch and consideration of a lock, you can always add security to your shed doors with a simple trick. Use several types of screws on each piece of hardware, including the hinges, with each type on each piece. A

hinge attached with a slotted screw here, a Phillips screw there, and a Torx screw there will take a lot more time to undo, and a thief may not have all the tools he needs to do it. Just assess your security needs and go from there when choosing a door latch. You may be surprised at all the options you find.